It is located amid the jungle and has two base points for starting the trek. The Eastern entrance can be reached from Beedehalli via Heggademane temple and the Western entrance from Kukke Subramanya via Girigadde. Our plan was to start from the Girigadde side and come back before it gets dark, even if we don’t make it to the summit as we didn’t want to camp overnight inside the forest.

We reached Subramanya village in the afternoon and decided to start the trek early morning next day. We set ourselves a target of completing 34 kms in 12 hours and getting back to the base on the same day.

It was 5:50 AM and raining very heavily. We were all set with our raincoats on and bags filled with fruits, energy bars and water. We started walking through the cemented road, which is the initial part of the trail. After walking for around 2 kms we reached a small gated entrance, which marks the beginning of the forest. None of the rain gods were on our side. It felt like they were taking out their wrath on the forest. Inspite of being in our raincoats, we got fully drenched within the first few minutes of our climb. 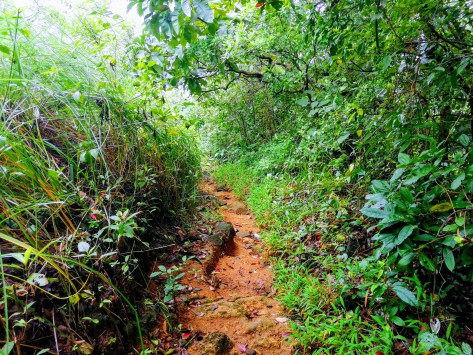 The 2-3 kms of jungle felt like it was never ending. The forest was dense and full of leeches. We tried to get rid of them, but invited more of them in the process. All our efforts of staying away from them were in-vain. The presence of leeches added to the difficulty level of the already treacherous jungle trail. It took us almost three hours to cross the jungle and reach Bhattara Mane.

Bhattara Mane is the house of the Bhatts, which is the only house within the jungle. Most trekkers seek shelter at Bhattara Mane after hours of trekking through the forest. This is also the last point in the trail where one can camp overnight. The forest check-post also lies few meters away from this point. One has to get permission from the forest check-post before continuing further. 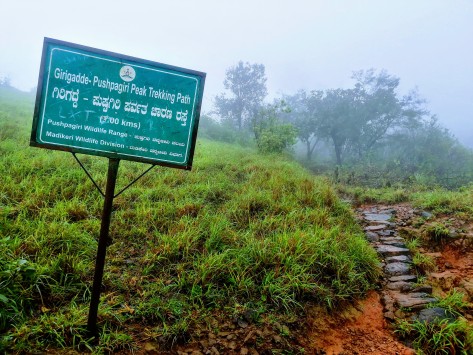 We rested for a while at Bhattara Mane, got permission from the forest office and continued trekking. The trail from here on is less difficult than the forest stretch. It mostly has inclined grasslands and green meadows. We had planned to continue with our ascent till noon as we wanted to be back before it gets dark. We assumed that the jungle would get dark early in the evening as the forest was very dense. It being the month of August, the jungle was at its densest form as it was the peak of monsoon season. 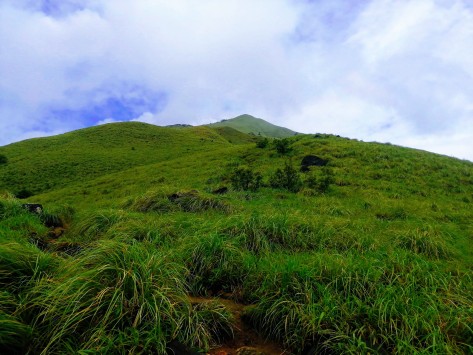 After crossing the forest check-post we crossed a few peaks, trekked for another couple of hours and decided to make our way downwards. We didn’t make it to the Kumara Parvatha peak as getting down safely before it gets dark was our first priority.

We trekked for 12 hours continuously with few pauses here and there. It was very foggy and rained very heavily throughout the day, which made it grueling for us to reach the peak.

We almost got lost while returning back as we spotted multiple paths for getting down the hill. Those paths were not visible to us during our way up due to heavy fog. We wandered away through some other trails for sometime and had to trace back the route till Bhattara Mane and start afresh.

The trail seemed endless and felt like being stuck in some loop. But we didn’t stop and finally, we were back to the base around 6:15 PM with no energy left and full of leech bites on our legs.

It was a once in a lifetime experience to be able to spend 12 hours of time inside such a dense and dangerous forest, amidst mother nature and coming back safely to the humdrum of city life.

This site uses Akismet to reduce spam. Learn how your comment data is processed.